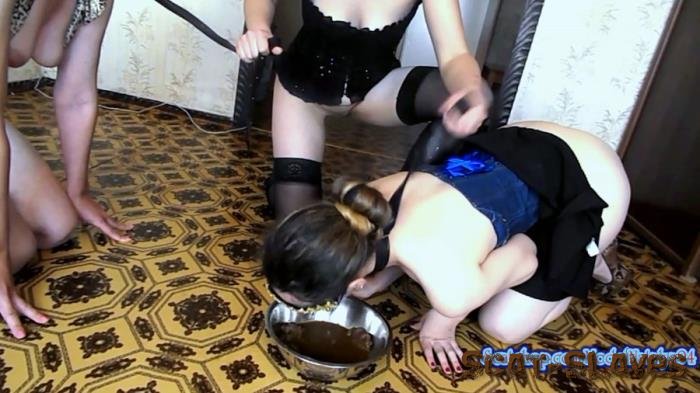 I decided to try a new girl Marina in the role of the obedient dog, in a couple of the Marina asked Carolina, I thought what if to try them together. I put on Carolina and Marina collars and brought them to the room and put them on my knees first I walk the dog Carolina on a leash around the room, Carolina crawls on her knees around the room I drive her on a leash, first I bare Caroline’s chest and she keeps crawling cancer on her knees, and after a few laps I bare Caroline’s ass and Caroline as an obedient dog crawls cancer on her knees with bare ass. After playing with the dog Caroline, I called the second dog Marina, I also walk her around the room on a leash, show you how she crawls cancer on her knees and how much the dog Marina obedient, after a few laps I first bare the chest of the dog Marina and again I drive her on a leash around the room, after the demonstration of the breast I bare the dog’s ass Marina and again walk her on a leash, I really want to go to the toilet, and I take the steel a dog bowl on the floor, and fill the iron dog bowl with shit and piss, yeah I want to see the dog Marina will eat the shit out of the dog bowls, the first one who started eating the shit it was the dog Carolina, Yes, eat my shit obedient dog Carolina I dunk her face in the iron bowl of shit and dog Carolina eats shit, then I take the dog Marina I, too, dipped her face in a dog bowl and told to eat shit, I have two obedient dogs, they want to eat my shit, Yes, I ordered first dog Marina shit in a bowl and then and dogs Carolina, my dogs take turns filling an iron dog bowl with shit, I again order them to eat shit and dogs Marina and Carolina again take turns eating shit from a bowl. At the end of the video my dogs sit on their knees with their mouths open and I pour them urine and shit from a bowl directly into the mouth, on the bare Breasts of the dogs Marina and Carolina runs shit. But my dogs were satisfied